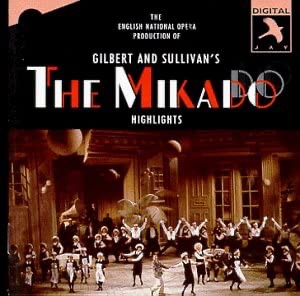 Words and tunes. Tunes and words. From Mike Batt and Andrew Lloyd Weber there is nowhere to go but down. Someone took me to see Gilbert & Sullivan.

The first G&S I saw live was actually the UK incarnation of the so-called Broadway Pirates. But Gilbert and Sullivan had always been there in the background. You can hardly avoid knowing that the flowers bloom in the spring (tra-la) and that a policeman’s lot is not a happy one (happy one.) The Muppets did Tit Willow (tit willow, tit willow) and Tom Lehrer sang the periodic table to the modern Major General. There was a very minor pop star who claimed to be called Gilbert O’Sullivan: it was years before I got the joke.

I think that my mum had been a devotee in the last days of the D’Oyley Cart: we actually saw the first night of Jonathan Miller’s legendary Mikado, which is still running, on and off, thirty years later. I don’t recall owning the Pirates album, but I definitely had the Mikado on a cassette tape.

Like Doctor Who, G&S were ruined by their fans. Stuffy, po-faced productions and village-hall Gilbert and Sulllivan Societies; fans who didn’t feel they’d had a good evening unless there had been at least seventeen (rehearsed) encores of Three Little Maids From School Are We; costumes which hadn’t been revamped since Queen Victoria descended the throne, and god forbid that there should be a cut or an ad lib. It was quite a big deal when Jonathan Miller and Joseph Papp blew the dust off and found that there were still some quite good tunes and quite funny words underneath.

Jonathan Miller famously turned the basic conceit of the Mikado back on itself: where W.S Gilbert gave us Japanese characters who talked like posh English people, Jonathan Miller gives us posh English people who keep saying they are Japanese. This spoils some of the jokes and improves others. It is less funny for Japanese geishas to act like flighty English schoolgirls once you have dressed them as, er, flighty English schoolgirls. But it is much funnier for an anyone-for-tennis Englishman to open a letter, turn it on its side, and announce “It’s in Japanese!”

The humour of the Mikado is pretty morbid: the central comic turn is a condemned man turned executioner (“for we said/whose next to be decapited/cannot cut off another’s head/until he’s cut his own off”). It works surprisingly well for the 1920s tea-party set to be discussing the next execution-victim in the same tone that they would discuss the cricket. (“You must admit that being buried alive is, in it’s way, a draw-back”.) There is always the faintest suspicion that W.S Gilbert thought that was what Japanese people were really like.

I enjoyed listening to the album again. (Actually, I watched the original production on YouTube.) I have sometimes said that I enjoy Dickens apart from the Dickensian bits. In a way, I enjoyed Gilbert and Sullivan apart from the Gilbertian and Sullivonian bits. The famous trios — Here’s a How-D'you-Do, To Wait in Solemn Silence and the Three Little Maids aren’t as funny as they think they are, and being very, very catchy is probably no excuse. Some of the sentimental numbers drag — I could probably live without hearing Sing a Merry Madrigal or Modesty at Marriage-Tide ever again. On the other hand I enjoyed the full-on mock operatic numbers more than I expected to. The Sun Whose Rays Are All Ablaze understandably brings the house down. I expected Alone and Yet alive to be a speed bump you have to get over to get to Tit Willow, but it turns out to be rather a highlight.

And the comic and mock-heroic numbers remain sensational. W.S Gilbert basically knows three jokes. There is the undercutting change of tone, so that you go from melodrama to colloquialism and back in a single line: “The warriors in serried ranks assemble, never fear — or they conceal it if they do”; “And have I journeyed for a month — or nearly — to find that Koko, who I love so dearly…” There is the clash of form and content, as when people sing a merry song about being sentenced to have their heads cut off; or when the words to a massive operatic set piece turn out to be incredibly trivial and banal. (“She borrows light that through the night mankind may all acclaim her / and truth to tell she lights up well so I for one don’t blame her.”) Above all, there is the self-aware skit on musical and dramatic conventions: everyone simultaneously knows, and does not know, that they are characters in an operetta. (The same thing is true of pantomime, which basically comes down to us from the same era.) Stuff happens in the story which make no sense except in terms of a musical score — as when Katisha can’t reveal that the wandering minstrel is the prince because the chorus are singing more loudly than she is. Nanky-Poo embarks on a pointless song about “the flowers that bloom in the spring, tra-la” at a crucial dramatic juncture and KoKo chips in with a verse of his own beginning “the flowers that bloom in the spring tra la have nothing to do with the case!”

And, of course, rhymes — insanely, madly, forced rhymes. Given that the main comic turn is the lord high executioner, we have an entire run of rhymes ending with things like “I am sorry to be of your pleasure the diminutioner” and “her honeymoon tomorrow commences so you shun her.”

An overblown Verdi-ish fanfare (Behold the Lord High Executioner) leads into a daftly lilting ballad (Taken From the County Jail) and a moderately cutting satirical patter (As Some Day It May Happen That a Victim Must Be Found). Theatre may sometimes get more profound, but rarely more fun.

Pirates of Penzance still stands up better for being less overblown, more like a musical and less like an opera shorter, more romantic, and a lot ess racist. I enjoyed listening to the record again; but it would take quite a lot to get me into a performance of the Mikado.

If it is even performable nowadays.

Well, perversely this sent me off to listen to Gilbert O'Sullivan's Alone Again, Naturally -- https://www.youtube.com/watch?v=D_P-v1BVQn8 -- and I was struck by what a fine example it is of whatever kind of thing it represents. The dark turn in the third verse is completely unexepected, and there is something fascinatingly morbid about how the tone of the song continues exactly the same through the part where both parents die.

Sorry to digress; but you did mention him.

On Gilbert and Sullivan ... this is one of those things, like Bob Dylan, that I am resigned to never getting my head around. My youngest recently took an examination in Music Theatre and had to perform When all night long a chap remains (from Iolanthe) and found it deeply uninspiring alongside the more modern selections. I'm with him. (But it's great that other enjoy it.)

When all night long a chap remains isn't a great tune, but in a sense it isn't meant to be -- it's the voice of a stolid sentry. But surely "every boy and every girl who's born into the world alive / is either a little liberal or else a little conservative" is a good line?

Maybe I've just heard it too many times.

And yet I don't feel that way about Something's Coming, Empty Chairs at Empty Tables or Giants in the Sky (the other three songs that were examined, and so rehearsed endlessly.)

Something like "young man despair" is probably a better example of the kind of thing they do.

"I have sometimes said that I enjoy Dickens apart from the Dickensian bits." I have somehow missed this if you have written it on the blog, but thanks for describing *exactly* the way I feel about his writing.

when in that house MPs divide
If they've a brain and cerebellum too
they've got to leave that brain outside
and vote just as their leaders tell'em too....