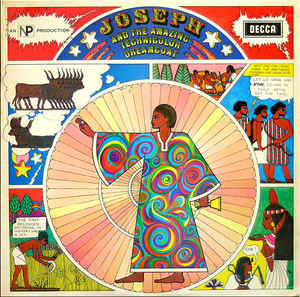 When I was about 10, the Vicar was treating the Sunday School to a Bible-themed quiz. He was reading questions out of a book, and he came to one which went:

“Who is the odd one out: Zebulon, Zephaniah or Naphtali”.

I was able to rase my hand and point out that Zephaniah was not one of the twelve sons of Jacob.

Be honest; how many of your were also going “Jacob, Jacob and sons” in your head as soon as I asked the question?

I suppose everyone did Joseph and the Amazing Technicolour Dreamcoat at school or Sunday School. They even did it as an end of term play on Grange Hill. (There is a film version which starts out, Henry V style, in a school hall.) I played Joseph in a Sunday School version, although you’ll be relieved to know that I was in the half of the cast who mimed the action while the choir sang the songs. The Vicar read the relevant passages from the Bible in between the numbers. (It’s all there in chapter thirty nine of Genesis.) This was, as it were, the ur-Joseph, the one very much intended for school halls, before Potipha and Go-Go-Go Joseph were added. Since then the thing has become horribly bloated: the current stage version has an embarrassing “follow-your-dreams” prologue, and a narrator who screeches every line as if she was doing I Will Survive at a drunk karaoke.

This original recording has a very light touch: one feels that the Early Andrew Lloyd Weber has more tunes in his head than he can use and happily tosses them out willy-nilly, sometimes two or three to a track. It isn’t yet a musical: although there are a number of different (male) voices, they aren’t particularly connected to different characters. It’s more like a narrative concept album. A children’s choir nods to its school-hall origins. It doesn’t take the Biblical story entirely seriously — I don’t think that God is mentioned even once, although I suppose the Divine Passive has promised Joseph a land of his own. But it doesn’t shade particularly into parody or send-up: Tim Rice clearly has the text in front of him and is drawing song lyrics out of it. He skips the baker and the butler altogether. The latter incarnations of the show became very silly indeed. (One More Angel was a grotesque country and western parody, performed in a silly accent, which wilfully misunderstands the original story.) This version contains a couple of echoes of other musical genres: Potipha’s song is a decadent 1920s charleston; and of course Pharaoh’s dreams are told in rock-and-roll. But one doesn’t feel that Elvis himself is strutting around ancient Egypt: it’s just a witty musical reference.

Although it’s a lush, singable tune, Any Dream Will Do has always seemed to me to be a pop song which Rice/Weber had lying about and decided to end the show with: I have never really understood what it is saying about the preceding story.

Obviously, Potipha and Pharoah will resurface as King Herod in Jesus Christ Superstar: indeed, much of Tim Rice’s career has involved asking the question “What if a religious prophet / South American dictator / medieval minstrel / professional chess player had been a pop star?” There is an odd moment when one of Pilate’s riffs from Superstar gets randomly played in an Egyptian bazaar.

Tim Rice’s lyrics retain a so-bad-their-good virtuosity. You shouldn’t be able to get away with rhyming biscuit with district. A line like “All those things you saw in your pyjamas/were a long range forecast for your farmers” ought to result in the instant revocation of your poetic licence. But the lines, like the tunes, come so thick and fast that it works.

Douglas Adams tells us that Ford Prefect had a copy of Joseph and the Amazing Technicolour Dreamcoat in his satchel while posing as an out-of-work actor. It is still very hummable, but it now feels like an antique, speaking to us from a different world. (Who now remembers Jonah-Man Jazz?) But like the Wombles it is full of words and full of tunes: and it is using the words and the tunes to tell a definite story.

I started down the dark path very early.

"Be honest; how many of your were also going “Jacob, Jacob and sons” in your head as soon as I asked the question?"

Yes indeed. I blame this musical — and in fact the precise album shown here — for the fact that, while I know the names of the twelve sons, I can never remember the right order.

This was the first album I ever owned - c. 1973, and I've sung it in numerous times and played piano accompaniment for amateur church/school productions (of the 20 minute original) (also done the same for Jonah Man Jazz, Daniel Jazz and Swingin' Samson amongst others).
Based on your list so far, it could well be the Geoff Love and His Orchestra's "Bond Themes" LP tomorrow?

Why do you say that, I wonder?

We certainly had a copy in the house, but it wasn't one of my Ten Big Formative Influences.

BTW -- is there a recording of that original 20 minute version anywhere? I'd be fascinated to hear it some day.

Due to early and repeated exposure to the tape (the version with Potiphar and the Elvis/Cliff Richard voice joke) this is one of the tiny set of musicals I can thole.

I am certain that the line about Jacob being "a fine example of a family man" was just a convenient lyric born of ignorance, but I prefer to think of it as a droll jest about just how terrible Jacob was as a father.