The last time I saw Hamlet at the Old Vic (at the close of the last millennium), Hamlet delivered "get thee to a nunnery" from a rocking horse and Ophelia did her mad scene with no clothes on. So I suppose I ought to be quite relieved that this stripped-down production lacks any particular Big Production Idea. Hamlet (Billy Howell) is a very angry young man. He keeps speaking lines into a dictaphone, possibly to give Horatio something to go on when she absents herself from felcity awhile in order to tell Hamlet's story. (Or possibly the producer really likes Krapps Last Tape. Beckett gets everywhere.) It's a neat bit of business but it doesn't make much difference to anything.

It's kind of obligatory in modern productions for producers to invent scenes which Shakespeare left out. This one begins with the Prince centre stage, dictating and listening to fragments of speeches while an old film of Mummy Hamlet and Daddy Hamlet (when the Prince was a little boy) plays at the back of the stage. ("My sometime sister, now my queen" is played repeatedly.) It ends with the dead Hamlet standing up and being greeted by his father's ghost, while the same footage plays in the background. If this is supposed to suggest an unprecedented Oedipal motivation, I couldn't particularly spot it in the rest of the production.

The interval comes half way through the chapel scene. Hamlet enters, finds his uncle saying his prayers, says "Now might I do it" and shoots him in the head. (He gets better.) I believe the David Tennant's production also ended the first half at this point, with Hamlet just about to do the bloody deed. If you've seen Hamlet, this at best, makes you say "I see what you did there." The theoretical audience member who doesn't know the story is likely to be merely confused. It substitutes a big bang for the hard questions the scene is actually asking. If repenting sinners go to heaven, what is the point of vengeance? But equally, if sinners go to hell, what is the point of vengeance? This troubles some American evangelical proponents of capital punishment, I believe.

That said, the bulk of the evening follows Shakespeare's road map pretty closely. Since you can't do the composite Hamlet in less than five hours, cuts there have to be, but I largely felt that it was extraneous material that was being pruned. This is not one of those productions where it feels as if a brand new play has been assembled out of Shakespearean quotes. (Not that there is anything intrinsically wrong with that.) Fortinbras, and therefore "how all occasions do inform against me" is absent. The company of travelling players is only two strong but they go right through the Murder of Gonzales (with Hamlet as the murderer) and the unexpurgated Hecuba speech. This is a big deal, because Hamlet's following monologue, asking how an actor can care so much about Hecuba, who is only a character in a play, where Hamlet, can't bring himself to avenge is own father, who is not a character in a play but a real person, always seems to go to the heart of the story. There's only one grave digger (Firdous Bamji, doubling up as the ghost and the player king) but his dialogue with Hamlet is intact, and agreeably dead-pan. After the interpolated prologue, we go straight to the court: there is no Benardo and Francisco on the battlements so the first we know of the ghost is when Horatio (Isabel Adomakoh Young) tells Hamlet about it. Hamlet doesn't say anything about putting on antic dispositions, so we are quite able to believe that he really is a couple of baked meats short of a funeral.
I am not sure why I felt imperceptibly disappointed by the whole exercise. I was watching on my TV (£60 for the stalls or £16 behind a pillar not seeming like a great deal, but good luck to the Old Vic at having mostly sold out) and it may be that this is one of those times when you really did have to be there. The new artistic director, Nancy Medina, welcomed the audience and told us how many countries the show was streaming to. The Old Vic bills itself as the oldest continually working theatre in the world, so there's a long history of Hamlets on this stage. An actress named Sarah Siddens essayed the role in 1781, so we can't very well object to female Horatios and Guildensterns. Perhaps I missed out on a sense-of-occassion that the audience could feel: they appeared to be pretty enthusiastic at the curtain calls.

I enjoyed Jason Barnett's geeky Polonius. (He doubles up as the foppish messenger Osric.) Finbar Lynch's understated and naturalistic Claudius somehow made me think of Dominic Cummings. But everything seemed pitched two notes two high. Hamlet picks up his mother (Niamh Cusack) and physically throws her on the bed, before shooting Polonius through the arras. He yells "a heavy deed, almost as bad dear mother as kill a king and marry with his brother" and she yells "kill a king?" back at him. If ever there are two lines that needed to be understated, those are they. Laertes (Taheen Modak, confusingly doubling up as Rosancrantz) screams when he finds out that his father is dead and sobs loudly when he hears about his sister's death: Hamlet also blubs before the sword fight, suggesting that just possibly the readiness might not be as all as he had supposed.

It might be that the cameras positioned us too close to the action; and more subtlety would have been apparent if I had paid for one of those cheap seats further back. But I didn't love this sweet prince enough to forgive him for all the mayhem he causes, which is surely the least an actor has to pull off. I get that he's very cross, but I kept thinking of C.S Lewis's comment on a student production of one of the Greek tragedies: "Who is this man, and why won't he stop shouting at me?"

At the end of the play, the ghost takes off his hood and looks at Hamlet, and leads him through a trap door into the cellar beneath the stage. The last lines have been juggled around, so "The rest is silence" are the final words of the play. To which one was tempted to say, "thank goodness for that." 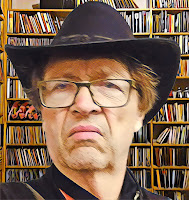 I am trying very hard to be a semi-professional writer and have taken the leap of faith of down-sizing my day job.

If you enjoy these reviews, please consider leaving a tip on the Ko-Fi platform.

If you can afford it, please consider becoming a Patreon, by pledging £1 or more each time I publish an essay on the main blog. (I don't charge for these little reviews.)

Please do not feed the troll.

Pledge £1 for each essay.

Make a one-off donation on Ko-Fi

No comments:
Email ThisBlogThis!Share to TwitterShare to FacebookShare to Pinterest
Labels: Theatre

The Banshees of Inisherin