Ten Album Challenge:  # 0
Everyone who uses Facebook — which is to say, everyone — will be aware of the Ten Album Covers Challenge. People are asked to upload pictures of the Ten Albums That Had The Most Influence On Them, without comment. It’s a bit like Desert Island Discs. The trick is to give everyone the impression that you have excellent musical taste without giving anyone the impression that that is what you are trying to do. Too much classical music makes you look a bit pretentious; but too much Floyd or Zeppelin make you look like an old man who wants to be down with the kids. And obviously Hey Jude or My Way amounts to an admission that you don’t particularly like music too start with.

Which isn’t that bad an admission. I mean, I’d be pretty stuck if I had to make a list of the Ten Paintings or Ten Sports Cars that had most influenced me.

Naturally, a lot of people just list their ten all time favourite albums: but I had a go at listing ten formative albums — ten albums that actually did influence my taste.

If you are playing the Facebook Game by the rules you aren’t meant to actually say anything about the albums of your choice: so I thought perhaps I would jot a few thoughts down here.

These are the first albums I remember actually owning and/or listening to.

I don’t know if they count as “albums”: but they are certainly “long playing records”. When I first owned a transistor radio, I remember Ed Stewpot Stewart saying things like “Here is a song off Gary Glitter’s new album”. I had to ask my Dad what this could possibly mean: so far as I was concerned an album was something you stuck stamps or P.G Tips picture cards into.

I grew up in a world without Netfux. I grew up in a world without DVDs. I grew up in a world without VHS recorders. There was a legend that millionaires had devices which would let them store television programmes and watch them again at a time of their choice; but no human being owned such a thing. I honestly think that this is a bigger cultural change than computer games and the internet. I could only watch Doctor Who by being near a television set at the time Doctor Who was on; and if I missed it I missed it. There was a twenty five minute break in a friend’s birthday party so we could all watch part 3 of Genesis of the Daleks. And we could only watch television programmes if the BBC happened to be showing them that week or that month or that year. When they were gone they were gone. When The World Wide Web first hoved into view twenty years ago, the first thing any of us did was type in the titles of TV shows we remembered from when we were kids. The Banana Splits. The Clangers. The Changes. The Wooden Tops. Jungle Ted and The Lazy Button Poppers. (I may have dreamt that one.) Never mind not being able to remember who came after Fleagle, Beagle and Drooper or the second line of the Rentaghost theme tune: some of us were disposed to doubt that some of these programmes even existed.

So when we were Very Little TV shows existed only in our minds. We tried to remember the theme tunes and recite the opening speeches and act out scenes from last night’s show in the playground. And sometimes there were Long Playing Records with the soundtracks of single episodes, so we could hear the voices and learn the words and listen to them over and over and over and over and over 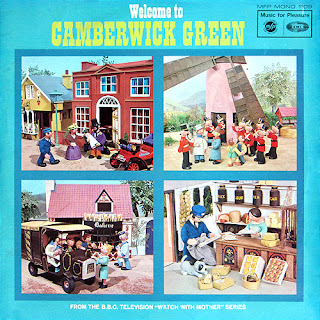 This was certainly the first record I ever owned. Camberwick Green was a kids puppet show set in an English Village which was part Thomas Hardy and part Toyland: Mayors and Postman and Millers and Policemen; each with their own little song. Peter the Postman was a very busy man who gathers up the letters as quickly as he can, where Captain Snort felt that we would never be stuck in a humpety bumpety army truck. There was still an actual bakery in the village where I lived and against all the odds the man who ran the shop was named Michael, so I more than half believed he was Mickey Murphy the master baker, pudding pie and pastry baker. One side of the LP had a story about Peter The Postman; the other side had a story about a window cleaner. He very nearly falls off his ladder, which was more peril than I could cope with. It may very well have been a present to pacify me while my mother was in hospital giving birth to my sister. 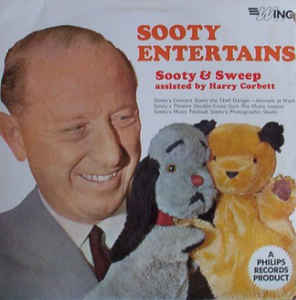 How did Sooty and Sweep ever become such cult figures? I believe they still exist in some form or other. Harry Corbett was an averagely good children’s conjurer with a Lancashire accent. Sooty was a glove-puppet teddy bear who could not speak. Sweep was a glove puppet dog who communicated in squeaks. The act consisted of very mild slapstick; frequently ending with Sooty squirting a water pistol in Mr Corbett’s face. Very little of this could have come across in the audio medium: presumably it consisted of Corbett saying “Sooty you scalliwag what are you doing now?” over and over again. (But then we are told that several ventriloquists successfully made the transition to radio, which must have made the “not moving your lips” part quite a bit easier.) There first time I ever went to the theater it was to see the original Mr Corbett and Sooty in the flesh, or indeed the fur. 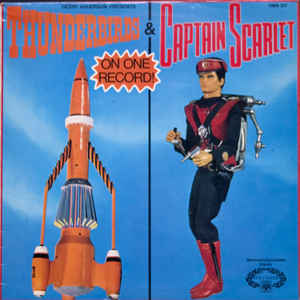 I must have been older when I had the Thunderbirds records. Good though the voice actors undoubtedly were one cannot help thinking that most of the appeal of Supermarination was in the visuals. The best thing about the LP was that it adapted the very first episode of Thunderbirds, with the very first episode of Captain Scarlet on the flipside, so they served as origin-stories to some extent. I must have listened to them a great deal because chunks of dialog are still lodged in my head. “Your phenomenal brain made all this possible; now you are going to see it in action.” “Wait till we get to a clear stretch of road; we don’t want to create a scene”. “Although the heart of a thermonuclear explosion is something even he has never experienced there is no man on earth like Captain Scarlet. Disapointingly, I think that it had the version of the theme music which just went “Dar-de-dum-dum (dar de dum dum)" without the poetic lyrics about Captain Scarlet being the only one who knew the Mysterons game.

But of course, between ’76 and ’79 the most important, most listened to bit of vinyl in the universe was this: 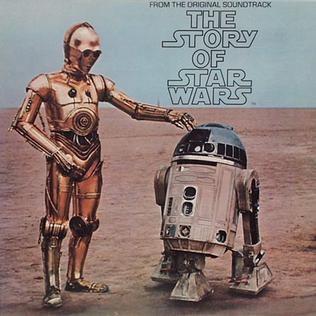 And take a look at my main, non-virus related blog.

I do hope you're going to finish this sequence of ten.

This was by way of a prologue. I may actually start to make a sane list of ten tomorrow.

Albums, as I expect you already know, did use to be bound albums much like a stamp collection, but containing a sequenced set of 78rpm discs with a musical piece split across them.

Actually, I did not know that..

We will get there...