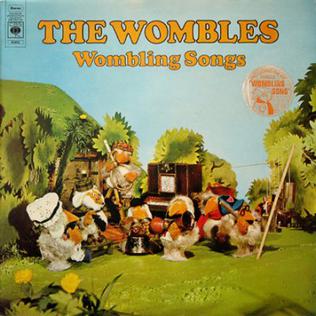 Spider-Man arrived in my life in February 1973. The Wombles TV show premiered in the same month of the same year. For all I know, Orinoco got blown across the common in the very same week that Mysterio made the world think Spider-Man was a bank robber.

First came the Wandering Wombles on Jackanory. Then came the original books, specially requested from the school library, back in the days when Wombles still looked like bears. Then came the Ivor Wood TV series which gave them snouts and brown moleskin noses and grey mink fur. And then the Wombles themselves turned up in the pop-music slot on Crackerjack: not the puppets, obviously, but real-life Wombles.

The TV show had a lilting whimsical theme tune that piped away for a few bars before changing its mind and turning into a catchy pop tune. Mike Batt who wrote the theme song asked for a copyright stake in the Wombles in lieu of royalties. He remixed a pop version of the theme tune, making the woodwindy introduction a bit more robust and brassy. Five Womble-albums and several hit Womble-singles followed. Remember Your A Womble went to number three in the charts and remains a fixture at a certain sort of ironic 1970s disco.

I don’t know why they were so popular. I don’t know why I liked them so much. Like the Smurfs and the Ninja Turtles they were a marketing man’s dream: a half-dozen characters, with distinct clothes and accessories, to be merchandised in different forms and at different scales and a distinctive “W” logo that could be stuck on badges and carrier bags. Each character was someone’s favourite: the fit sporty one; the fat lovable one; the clever one; the practical one; the, er, girl one. Uncle Bulgaria was everyone’s dad and uncle and headmaster. At a certain age the idea of a hidden world is incredibly appealing. There could be Wombles in any park or Borrowers under any skirting board: just as there are monsters in the cupboard and toys which come to life when you aren’t looking at them. In their original, story-book form the Wombles are a kind of materialist house-fairy. People don’t notice them, they never see: under their noses a Womble may be. It’s not that Wombles are invisible or magical; it’s just that humans are incredibly unobservant. Humans often overlook Hobbits as well; and Wombles have furry feet.

In a hole in the ground, there lived a Womble…

Wombling Songs was the first musical album I ever owned. Two of my friends actively dislike — even object to — songs with Tunes. It was very probably Wombling Songs which put me on the wrong track. Mike Batt can certainly do tunes. He wrote Bright Eyes for Art Garfunkel and shares some of the blame for Phantom of the Opera with Andrew Lloyd-Weber (who we may come back to). His own musical, Hunting of the Snark, was a legendary flop.

I don’t know what I thought listening to Wombling Songs again would feel like. A novelty record: a quick cash-in from a kid’s TV show. I was expecting, truthfully, to be embarrassed by it. But it is one of those rare things which is a hundred times better than it ever needed to be: as if a talented producer was using his Womble-windfall to show off his brand: a whole stream of catchy tunes, funny lyrics and clever production ideas. A couple of years later he produced All Around My Hat for Steeleye Span. There is a persistant oral tradition, sadly untrue, that Maddy Prior was inside the Madam Cholet costume. Remember You’re A Womble turns into folk rock in the middle. What else would a Womble dance to?

It was only five years since Sergeant Pepper had taught the band to play, and I can’t quite shake the feeling that Wombling Songs is a more or less conscious Beatles tribute album. The newspapers were certainly talking about Womblemania. Bungo’s Birthday sounds a lot like You Say It’s Your Birthday off the White Album; and Madam Cholet (“as sweet as cafe au lait”) is pretty obviously Michelle. But there is something less obviously McCartneyish about “ooo-Wombling-along Wombling along yeah”. It crops up in the middle of one song and at the end of another, which makes one slightly think Abbey Road Long Medley. And having started the game it’s hard to stop: is Dreaming in the Sun Sun-King or Blue Jay Way?

Probably, George Martin was in the water, and any hot-young producer was going to fill a pop record with orchestral riffs and French horns and string quartets. Of course there is a blast of bagpipes when the lyrics turn to the Wombles of the Old MacWomble Clan. Naturally Madame Cholet’s song opens with a bit of the Marseilles. But there is no particular reason for a catchy march about Wellington Womble (“he’s the ever so ratherest keenest brainiest Womble of them all”) to start with some summery flamenco-ish strings. The Wombles’ Warning is a a whimsically sinister ballad with a plinky-plonky hook (“don’t you be tempted to the nettle-beds by bits of iron-mongery/if there are mushrooms in the nettle beds it’s better to go hung-er-ee”). It didn’t have to end with a full-on orchestral take on the melody or fade out with some pan-pipes. Possibly we’re just talking about filler: one good tune doesn’t make a song, and ten good songs don’t fill an album, so Batt bulks the record out with contrasting intros and instrumental interludes. But it gives what should have been a bad kid’s record a post-60s concept album feel.

Several times I caught myself wishing that the lyrics had been written in Latin or Chinese. Then we could pretend that these heroic and melancholy and sinister tunes were actually about something. Something other than a not-particularly interesting set of animated rats.

But maybe that’s the point. The Wombles motto was “make good use of bad rubbish” and that’s exactly what Mike Batt did.

Having read this, I am deeply disappointed to find the the Pirate Bay doesn't seem to know anything about Wombling Songs. I suppose I could buy the MP3 from Amazon, but £8.69 feels a bit much. Oh well.

The songs are individually on YouTube if you don't Spotify

Your phrase "one of those rare things which is a hundred times better than it ever needed to be" is very resonant to me. A lot of my favourite things fall into that category: for example, all the Pixar films whose only commercial imperative was to make kids laugh, but which they decided to make into art anyway.

If you minuetto alegretto you will live to be old (we had a couple of singles rather than the album). I remember listening to Orinoco and the Purple Paw mystery dozens of times crossing the Atlantic as a 7 yr old back when having children's stories you could listen to with specially issued headphones seemed amazing.

Wellington was my favourite! I haven’t heard this song for 45 years but I remembered every word. Also I remember Grandad taking us to Wimbledon Common on a Womble hunt!

I was never really a big womble fan (I think I found them too mundanely human-ish, rather like Paddington. I've always been more a fan of the exotic and weird) but I have to hunt out a copy of the Hunting of the Snark now.

Having listened through the album (thanks to the playlist at https://www.youtube.com/watch?v=bRiGm0zM6ps&list=PLNhncP7yhy0VwWm5rN95DzAZSbQOQkiO2 ) you're right: this is much better than it needs to be, with plenty of melodic, harmonic and even rhythmic sophistication. And, yes, there is definitely a Beatlesish quality to some of the songs.

Orinoco was my favourite, and Minuetto Allegretto. Just yesterday in a Covid clear-out I found an LP of Mike Batt's sci-fi concept album Zero Zero, which I also recall seeing on TV - a bizarre Australian production with Batt starring as the protagonist. I might hang onto it for weirdness' sake.

Batt's Tarot Suite is another great weird mash-up of styles but I adore it.