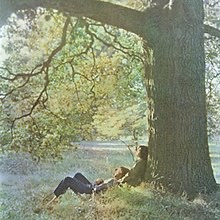 I became interested in the Beatles at the time of Free As a Bird and the Anthology. I had the Red Album and the Blue Album and then Rubber Soul and Sgt Pepper and then all the others and then all of Lennon’s solo stuff including the one with the rude cover and a smattering of Wings and more books about the Beatles than was strictly necessary.

The Beatles wrote some very good songs. As Jeeves might have said: I understand they have given general satisfaction.

I think I became obsessed with the Beatles because they had a back story. Even listening to those two “best of” CDs, it was clear that there was an arc. From Please Please Me to Strawberry Fields Forever; and then from Strawberry Fields to, say, The Long and Winding Road. From Quarry Bank Grammar School to the roof of the Apple Building, and thence to the Dakota building. The via dolorosa. Christ, you know it ain’t easy.

There is no hearing the Beatles for the first time. There was never a time when I didn’t know about Yellow Submarine: they sang it as a nursery rhyme on Play School; the horticultural octopus as well. When I was first listening to Ed Stewpot Stewart there was a song about a Scotsman called Mullakyn Tyre that he played incessantly; and then it was December 1980 and all anyone played was Jealous Guy and Woman and Imagine, Imagine, Imagine. (And Shadduppa Yer Face, admittedly.)

This is supposed to be a list of the ten albums which influenced my musical taste, not my ten favourite albums, and definitely not my ten favourite Beatles albums. Penny Lane and Norwegian Wood and Blackbird are wonderful songs; but they were the kind of songs I’d been listening to my whole life. I grew up in a post-Beatles world. Listening to Sgt Pepper or Abbey Road in your thirties is not like opening a new door. It’s more like: “Oh, I see: that’s where it all came from”. I said that I thought the Wombling Songs was a more or less conscious Beatles tribute album. It would be truer to say that when I first listened to Sgt Pepper I thought “Oh, that sounds awfully like the Wombles.” The young C.S. Lewis enjoyed the Iliad because it reminded him of Sohrab and Rustum.

Other people since the Beatles have made concept albums; other people since the Beatles have experimented with drugs and become interested in mysticism and meditation. “Psychedelic” is a genre. Sgt Pepper and Revolver are wonderful collections of songs, but they can’t possibly feel as new and radical and different as they did half a century ago. But it is still possible to listen to the very early songs — when John and Paul were a gestalt entity rather than two rock-stars whose songs mainly appeared under the same banner — and get some sense of the impact they must have had.

There were people who said that the Beatles were creating a new kind of music; there were people who said that it was hardly music at all. And both were kind of right. In a weird way Love Me Do and Please Please Me are barely songs at all. You couldn’t point to a melody line and say look: the mark of a tune-writer of genius. They are collections of musical ideas: harmonies, hooks, jingles. And it is all in the performance. A million and one people have recorded Yesterday. A cover-version of She Loves You would be pointless.

It’s the little things — repeating “come on” eight times, John doing the call and Paul doing the response — which can still make me sing and (whisper it softly) dance in an empty room.

John Lennon/Plastic Ono band is part of that same narrative arc, and probably doesn’t make sense outside it. It’s a record about having been in a band called the Beatles and not being in that band any more. It’s a record about growing up in the 50s, living through the 60s and coming out on the other side. It’s a repudiation of everything of the previous ten years, but its those years which give it its power and meaning. It’s a lot like The Last Jedi, come to think of it. When we say it is raw and stark and simple we are implicitly contrasting it with the lush production of Strawberry Field or the goonish hi-jinks of I Am the Walrus. (Very probably, Phil Spector was as clever a producer in his own way as George Martin: I imagine it takes a lot of skill to produce a record that sounds as if no-one is producing it.)

It’s fame depends on three songs: Mother; God; and Working Class Hero. (They shouldn’t be taken out of context: the whole record stands as a single entity.)

Working Class Hero is trying to be more like Dylan than Dylan. It sounds washed out; shattered; exhausted. Beat. Smart alecs love to point out that Lennon was never working class: he went to grammar school and grew up in the posher end of suburbia. But that’s kind of the point. He isn’t singing about himself: he is singing about everybody else; about what “they” in general to do “you” in general. They hurt you at home and they hit you at school…when they’ve tortured and scared you for twenty odd years…keep you doped on religion and sex and TV….you’re still fucking peasants so far as I can see. It’s the life he thinks he’s escaped from; and the life he maybe wants to lead other people out of. Consciousness raising.

There is a certain amount of howling and wailing in Working Class Hero; but Mother ends with him screaming into the mic. Everyone says that he was undergoing Primal Scream therapy when he was making the album: but Primal Scream therapy isn’t actually about screaming. Beatles lyrics are very abstract; about girls and boys and dances and diamond rings and break-ups, with few whys and fewer wherefores. Yesterday or She Loves You speak to virtually any romantic situation: that’s one of the reasons they are so successful. Plastic Ono Band is highly personal; but apart from name-checking Yoko it’s very non-specific. We may think that Mother is about Julia Lennon and Fred Lennon: but there’s not a word about John’s actual childhood in the song. It’s about mothers in general and fathers in general. About loss in general. The final song on the album is chillingly off-hand about bereavement, almost treating it as a black joke — as a macho exercise in emotional self-flagellation. My mummy’s dead / can’t get it through my head.

Last year folk-singer Jackie Oates covered Mother on her Joy of Living album which (for various reasons) could almost be seen as a folkie Plastic Ono Band. I was surprised that, without the screaming and the drums, the melody is powerful enough to survive it’s transition into an entirely different idiom.

And then there is God. Less like a Beatles song and more like one of Yoko’s pieces of conceptual art: the fact of its existence more interesting than the artefact itself. Fourteen things which John Lennon no long believes in: God, Jesus, Yoga, Magic, Hitler, Bob Dylan… with a simple, insistent drum-riff on each one. (The drums are played by someone with the unlikely name of Ringo Starr, incidentally.) The final, inevitable, “I don’t believe in Beatles”, after which the song just seems to come to a halt. And the wistful, lyrical conclusion, in John’s own voice. “The dream is over.” He can’t resist kicking Paul one last time. “What can I say…the dream is over, yesterday.” And a half apology to all those fans. “You’ll just have to carry on….”

Let It Be was the final Beatles Album to be released; but Abbey Road, with its up beat “the love you make is equal to the love you give” sign off was the last thing the band recorded. But this is where the Beatles, and the 1960s, ended: as pointed and eloquent a letter of resignation as you could, er, imagine.

But, as someone said: it is the kind of album which is more admired than enjoyed.

"Very probably, Phil Spector was as clever a producer in his own way as George Martin: I imagine it takes a lot of skill to produce a record that sounds as if no-one is producing it.'

Thing is, he wasn't. it's fairly well established Spector's main contribution was coming up with ever-more outlandish excuses for his absence while Lennon effectively produced the album himself. But I think that really enhances your point. It's the seeming spontaneity of it all, where nothing seems written or arranged or decided on, it just seems to all happen in the moment, which gives the album it's appeal. And perhaps it's the sort of thing you can only do after you've written lots of stuff that's clearly very smart and sophisticated.

I'd say this is probably my personal favourite of all the Beatles-related albums, and that's a lot to do with why.