Ten Album Challenge # 6:
The Times They Are A-Changin' 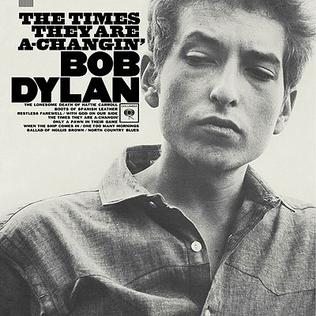 If I had been born a century earlier I would have shared a planet with Charles Dickens. If I had been an Elizabethan my life would have crossed over with William Shakespeare’s. It so happens that I live at the same time as Bob Dylan. Bob Dylan continued to do live shows in his sixties, his seventies and who knows even his eighties. I never saw Richard Wagner conduct at Bayreuth but I have sat a few rows from Dylan in the Royal Albert Hall. Do I regard Dylan as the great artist of my time because I like folk music; or do I like folk music because the pre-eminent artist of the second half of the twentieth century was a folkie?

Dylan isn’t as ubiquitous as the Beatles, but everyone knows Blowin’ in the Wind and Knockin’ on Heaven’s Door. I have just had a memory — let’s call it a flashback — of standing in teenage Sunday School while an elderly youth leader tried to fit the words of the Sermon on the Mount to the tune of Blowin’ in the Wind. [*] If I were making a list of Twenty Five Albums That Influenced My Musical Taste then Don Mclean’s American Pie would have made the list. Don Mclean was the first live gig I ever went to, unless you include a free ticket to Hawkwind which came with a science fiction convention. [**] Don Mclean is a fine song writer and he puts on the best live act I have ever seen. But when I first heard Highway 61 Revisited I thought “Oh. I get it. American Pie is basically Desolation Row with a catchy tune behind it.”

The Times They Are A Changin’ is the first Dylan album I listened to right through. If I were making a shortlist of my all time favourite songs, five of them would come off this album. It is obviously the same kind of thing as John Lennon/Plastic Ono Band. Raw; personal; husky; with little beauty and nothing you would want to dance to. But Dylan has a facility with language that Lennon never came close to. [***] He understands story-telling and verbal economy: although the Early Bob hasn’t started to let off the psychedelic fireworks he became famous for.

His description of Hollis Brown’s suicide is bald and sparse; and yet the sense of claustrophobia is almost unbearable.

The guitar accompaniment isn’t much more than a pulse that shoots between the lines but it is clearly a song and not a poem, and a folk song at that. Some folksingers have a deep respect for what they call the Tradition: tentatively re-imagining a song while bending the knee to the great Anon who created it. Dylan regards folk music as a resource to be plundered and discarded. Not far beneath the surface of Hollis Brown is the half-memory of Pretty Polly, but they are wildly different songs. In that respect he is truly like his idol Woody Guthrie.

There is the same narrative economy in North Country Blues, the story of how a whole community turned into a ghost town when the mining industry closed down. It’s a constructed song, but it places itself heavily in the oral tradition. Come gather round friends and I’ll tell you a tale… Dylan’s rasping male voice somehow channels the unemployed miner’s wife: I think a female singer would have done it differently. It’s an object lesson in the relative merits of telling and showing:

I lived by the window
As he talked to himself
The silence of tongues, it was building
Then one morning's wake
The bed, it was bare
And I's left alone with three children

I don’t think Bob is trying to emulate a specific dialect: he is just happy to let words do what he tells them do. Martin Simpson does a fine cover of the song, but he sings “one morning I woke” and “I was left all alone.” (There are days of the week when I would chose “They took him to some public bar and there they beat him up / They said they had some reason but I disremember what” as my single favourite Dylan lyric.) And notice the way he rhymes “buildin’” with “children”.

With God On Our Side may be more artefact than song: we respect the audacity of writing the history of America in nine verses even if the song outstays its welcome. It may be the closest to the “whining” voice people parody, and not everyone loves the harmonica as much as Bob does. It feels uncomfortable that peacenik Bob sees the post-war rapprochement with Germany as a kind of betrayal; but it was less than two decades since 1945. (Am I bad person for wanting to say “technically, minister, you can’t fry something in an oven”?) For a while he used to add a line about Viet Nam to live performances [****] and he tends to omit the verse about Russia. But then at the end of of the song, he hits you with:

It’s an early example of the free association that would become his hallmark. The betrayal of Jesus has nothing to do with the nuclear weapons he was talking about in the last chapter. He’s been asking if God is on anyone’s side in war; very probably because he has heard German soldiers in world war one had “God mit uns” on their uniforms. The question of whether a very bad person can do a very bad thing and still be acting within the will of God is a quite different one. And yet the line raises the tone of the whole song; and sets up the final devastating verse (“If God’s on our side he’ll stop the next war”.) This verse was so popular that fans used to shout “Judas” at him during his 1966 tours.

Dylan didn’t like the term folk-singer: he said he sang “contemporary songs”. And he didn’t much like the term “protest song” he preferred “finger-pointing song”. Probably the two best things on the album are overtly finger-pointing songs; both about murders of black people by white people. I confess that I would not have known who Medger Evars was if not for Only a Pawn in the Game. Dylan tells us nothing about the man or the circumstances of the murder. (I only recently learned that Evars was a U.S veteran buried with full military honours, which is why Dylan describes his funeral in the way that he does.) Instead he presents an incredibly sophisticated anatomy of racism and racist violence; which resonates right down to the present day.

The South politician who preaches to the poor white man
"You got more than the blacks, don't complain
You're better than them, you been born with white skin, " they explain
And the Negro's name
Is used, it is plain
For the politician's gain
As he rises to fame
And the poor white remains
On the caboose of the train….

He sang this song on the same platform that Martin Luther King preached his "I have a dream!" speech, which must have taken a certain amount of chutzpah.

…to show that all’s equal
and that the courts are on the level
and that the ladder of justice
has no top and no bottom
and that even the nobles
get properly handled
once that the cops
have chased after and caught them….

Dylan’s eponymous first album is a record of the young man in the coffee house who wanted to be Woody Guthrie. The songs on Freewheelin’ are more famous. And then gradually the folk singer fades away and he starts to become Bob Dylan; surreal, rambling, free associative, our guide through the smoke rings of his mind. But it was this angry finger pointing album that turned me onto Dylan, and indirectly, onto contemporary folk music.

[**] Doctor and the Medics played a Student Union gig at Sussex a few hours before having their one and only number one record.

[***] Lennon had a unique aptitude for whacky surrealism; but it was rather suppressed by Paul and Yoko.

Almost thou persuadest me to give Dylan yet another go.

True, all true. But the late Sixties stuff is better still.

Trivial and irrelevant fact - I was at that Dr. and the Medics gig.

For Reasons I can't explain this is one of the few 60's Dylan albums I have never owned. American Pie was the first pop album I ever owned and I reaslised in my mid teens that I was really into words, song lyrics and I had listened to a couple of Dylan albums and I had not gotten into him and was puzzled why as he was regarded as the great lyrics man. And then it slowly began to dawn on me. It is very hard to say what Dylan does, somehow in his words and music he is redefining reality. Don MacLean does not do that; those are great little songs but with American Pie you always feels as if you could understand it if you just had a chart telling you who all the people were. I never feel that with Desolation Row. Those early 'protest' songs were also about redefining, Dylan is expanding protest so it is never just about the issues. Propaganda tells us what to feel, art feels and invites us to feel with it. Except Dylan doesn't invite, he commands, he compels us to feel in a more complex way than we wanted to. He still has the power to scare. There is a moment in concert in 1964 when he sings 'It's all right Ma' and has to reassure the audience by saying 'Don't let that scare you' and even now we'd sooner be scared together than alone and then in this fear and shared fear there is the wit and the humour as well. I didn't get into folk music because of Dylan, I loved folk music through people who had been influence by Dylan and then found the source. What would folk have been without him? Earnest, preachy, a left wing ideology that tried a bit too hard. I seem to be on a roll, better stop. Thanks Andrew for helping me find some thoughts of my own.

What can I say? Thank you so much for sharing your thoughts back with me.

Thanks Andrew. I have been listening to a lot of Dylan recently, especially volume 7 of the bootleg series. It has all these alternative takes, and they made me appreciate Dylan as a musician. He said in his Nobel speech his focus was always on music, the practicalities of music, and not 'literature', and when you look at all the changes he is putting the same songs through to find what he wants you see that.

You remember me saying I never wanted a crib for Desolation Row, well here it is. https://www.lyricinterpretations.com/bob-dylan/desolation-row I find the first verse plausible, okay there was a hanging where they sold postcards, there was a particular commissioner, and a circus. But then as soon he says 'In the second verse, Cinderella is Joseph Stalin and Romeo is Adolph Hitler.' I know that is exactly what I didn't want, it turns the whole thing into a very crass allegory.