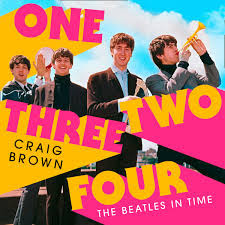 You would think that there would be nothing new to say about the Beatles. You would be right. So Craig Brown’s new book says everything that has already been said all over again. But in fairness, he says it very well.

Brown is the guy who writes the “diaries” at the back of Private Eye — send-ups of generally pompous and pretentious celebrities. So he has a good eye for the ridiculous and the absurd, but a really annoying tendency to sneer. He has correctly spotted that the Beatles childhood homes in Liverpool are very ordinary interwar properties, and that the National Trust has filled them with the kinds of furniture and kitchen utensils they would have had; not, in most cases the originals. This is so funny that he can’t let the gag go.

If you were a battered old dustbin, circa 1940–1960, just imagine how proud you would be to end up as a key exhibit in a National Trust property, with 12,000 visitors a year admiring you for looking just like the dustbin into which the McCartney family used to throw its rubbish!

One or two people take photographs of where the three steps would be, were they here, which they aren’t.

He is at his most interesting when he is talking about the very minor bit-players. There is an underlying theme that a lot of the people whose story the Beatles intersected with never got over it. Pete Best was kicked out of the band for not being a very good drummer, and tried to kill himself. (I did not know that.) Jimmy Nicol played the drums for a few shows while Ringo had his tonsils out, and spent the rest of his life disappointed because he never became a star in his own right. Jeanne-Paule Marie Deckers ("Sister Smile") really did take her own life; although her only connection with the Beatles was having been in the charts before they were. Cliff Richard and the Rolling Stones, by this account, spent their whole careers being cross because the Beatles were more successful than they were. The Four were very unimpressed with Elvis, but treated Dylan with awe and respect.

Brown's chapters about the popular reaction to the Beatles are very interesting. It is really, really hard to remember how radical the group seemed. Young people (and some serious music writers) felt that they had never heard anything like them. (“Their chords were outrageous, just outrageous” said Dylan.) The more conservative said that they were “devoid of talent” “emitting nerveless sounds” producing “anti-music”. And of course those rather neat haircuts and smart suits were regarded as a threat to civilisation and/or a signpost to the future of the human race. There are some good chapters about young women who treated Paul McCartney (particularly) with what can only be described as religious adulation. I mean, yeah, he’s a nice enough chap and tolerably good looking, but what actually could the fuss have been about? Not, so far as we can tell, his musical talent. Even George Martin was more impressed with the Beatles personalities than their song writing abilities.

The book is cleverly constructed in a series of short, not always sequential essays: a first person account of the author's trip to a convention in Liverpool where people were selling 1960s Beatle tat for thousands of pounds jostles an excerpt from a fan’s diary describing the break-up (like your parents getting divorced, apparently). Some of the material feels like filler: there are whole chapters culled from the Oxford English Dictionary telling us that the words “trendy” and “flares” were first recorded in 1964. I was surprised to learn that the word “grotty” didn’t exist before Hard Days Night. Some people misheard the lyrics of Revolution as “if you go carrying pictures of German cows” and thought that Let it Be said “in my orthodontist they are standing right in front of me”. I understand that they have killed both the Earl of Murray and Lady Mondegrene. John certainly did like puns, and the idea that there is a connection between seeing a double-meaning behind every word and the sensation you get when you take LSD is quite intriguing. There are a number of more or less convincing counterfactual chapters, in which a hardly remembered duo called McCartney and Lennon appear at Gerry and the Pacemakers tribute nights and Yoko Ono Starkey organises bed-ins for peace. There is a very obvious, sneering chapter about Yoko which seems to regard her as a confidence trickster only one step removed from Magic Alex and the Maharishi.

The book puts Brian Epstein center stage; suggesting that the Beatles would scarcely have existed if not for him. (Other books say that he made some very bad business decisions on the groups' behalf, but that is not touched on here.) George Martin seems little more than a bit player. Brown doesn’t commit himself on the crucial question of whether or not John Lennon allowed Brian Epstien to touch his willy while they were on holiday together. The final chapter works backwards from Epstein’s death to his first visit to the Cavern club.

It’s a very long book and I read it more or less in one go. I didn’t, in fact, laugh out loud. Mark Lewisohn doesn’t think that volume 2 of his definitive biography will see the light of day before 2023.

Did you ever read Peter Brown's book "the live you make"?

Sorry, typed that on my phone. The book is called The Love You Make and you can read my thoughts on it here: https://reprog.wordpress.com/2016/12/01/what-ive-been-reading-lately-part-16/

That's the fellow who called to say that they they could get married in Gibraltar near Spain?

Ordered a copy from Amazon. (Doesn't exist on Kindle!) I'll let you know what I think.

The one I'd like to read is Pete Shotton's (John Lennon's childhood friend who he stayed mates with through most of the Beatle years) but that seems to be out of print and only available for Silly Money.

That's him. I believe he also called to say they could make it OK. (I think that's a candidate for the worst Beatles-branded song after the very early days.)

I just discovered that Shotton founded the Fatty Arbuckle's restaurant chain. What a strange world we live in.

It looks like you can borrow Shotton's book free from the Emergency Public Library of America: https://archive.org/details/johnlennoninmyli00shot