Appear to have slipped into strange parallel world. People are hanging Union Jacks out of their windows and running bunting across the road.

How, in fact, do you run a string of bunting from one upstairs window, across a street, to the upstairs window on the opposite side of the road? Mentally try to picture someone carrying a long string from his neighbours house, up his own stairs and through his bedroom window. Realise that that wouldn't help. Not many people have a ladder which will reach to the first floor of a house, which is how window cleaners stay in business. (Window cleaners are doing well during the Crisis. They work by themselves; you can't get much more socially distanced than at the top of a ladder, and they spend most of their working lives with their hands in buckets of soapy water.) Maybe if you were very clever you could thread the string through a basketball and throw it across the road to your neighbour. Percy Grainger, the composer and folk collector could apparently through a cricket ball in the air, run through the front door of the house, out the back door, and catch it on the other side. And I suspect the houses where he did the trick were bigger than the average suburban semi. Brunell started off the Clifton Suspension bridge with a kite, on a very long string. He sent the kite over the gorge and arranged for there to be a man on the other side to catch it. He then had a very thin piece of string going from one side of Avon Gorge to the other; he used that to drag a thicker piece of string across and then a rope and then a cable and eventually a bridge. There is a message in there somewhere.

L thinks they probably dangled a long piece of string out of their bedroom window, tied it to the end of the bunting and then went upstair and pulled it through.

The anniversary of V.E day has never been a public event in my lifetime. There was a commemoration on the 50th anniversary. John Major wanted to run a Spam Fritter competition but Vera Lynn told him he couldn't. The First and Second World Wars were always commemorated on the Sunday after the eleventh of November. We called it poppy day. It lasted for one day. (Apparently Poppy Day is not a thing in America. Craig Brown says that lots of Americans thought that the pretty nurse was selling puppies from a tray.)

A man was even erecting a public address system and test driving a recording of There'll Always Be An England. ("Well, that's not saying very much. There'll always be a North Pole.") I ask L if I am allowed to play Billy Bragg back at them.

Street parties are also I think rather more the stuff of collective imagination than historical reality and I realise that you are even now e-mailing a picture of all the urchins on your street eating Birds Instant Trifle to celebrate the wedding of Charles and Di to me. One of my main memories of the Silver Jubilee is grown ups saying that if people were properly patriotic they would be having street parties like wot they did for the Coronation, and kids saying that the adults in their street were too mean to arrange one. (Are street parties a thing in America? Or do American kids mark national celebrations by dancing around fire hydrants?)

At about five o clock people came out of their front doors and stood at the ends of the paths with glasses of wine and beer and started, you may find this difficult to believe because we are English, talking to their neighbours. As the hour wore on people ventured onto the pavements but remained a sensible meter or two apart. Everyone made space for the Deliveroo cyclists and pointed him in the right direction. We learned, and admittedly immediately forgot, people's names and talked about their cats. We all said it was a pity that we didn't do this kind of thing when there wasn't a National Emergency and promised to have some kind of street-level social When It Was All Over. No one attempted a conga. I suppose that strictly speaking I shouldn't have accepted a scone from the person who was passing round home made scones on a tray, but I felt it was an acceptable risk.

L found two flags in her cellar which she believes her grandfather hung outside the shop where he worked on V.E day and V.J day and haven't seen the light of day since. (The expression "V.J day" was fortunately not used in front of the nice Asian couple.) I didn't hear the Queen's Speech but the mandatory joining in with the Vera Lynn song was achieved with a complete lack of jingoism.

My father used to say that when everything was in short supply, butchers would try to find substitute products which were technically not rationed and sell them instead of pork or beef. So people used to look up from their disgusting Sunday Lunch and sing... "Whale meat again...!"

My Grandfather was a conscientious objector during the actual war. My Mum won a small china owl on the original V.E day celebration for singing You Are My Sunshine at a children's talent competition. My sister has provided me with a photo of the actual owl. After the war the C.O's and their families helped to run a social club for German prisoners of war who had been freed but not repatriated. 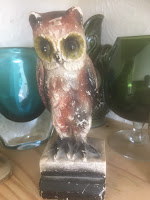